Yackandandah residents hit a new milestone on the 31st of August when the town’s mini grid recorded over 3GWh of locally generated renewable energy! This is an exciting step as the town strives to reach its 100% renewable energy target.

This 3GWh is enough to power the MCG lights for almost a decade and has reduced carbon emissions by 420 tonnes when compared with coal-fired generation. It has also resulted in $473,273.90 in collective bill savings for the 191 customers involved.

Since the project began, participants have generated a whopping 30% of their energy from the sun. This also represents an average annual bill saving of 63% when compared to equivalent properties without solar. Even more remarkably, those with batteries found an average bill saving of 72%. Yep, 72%!

In numbers: Read what 3GWh means to the community and the environment 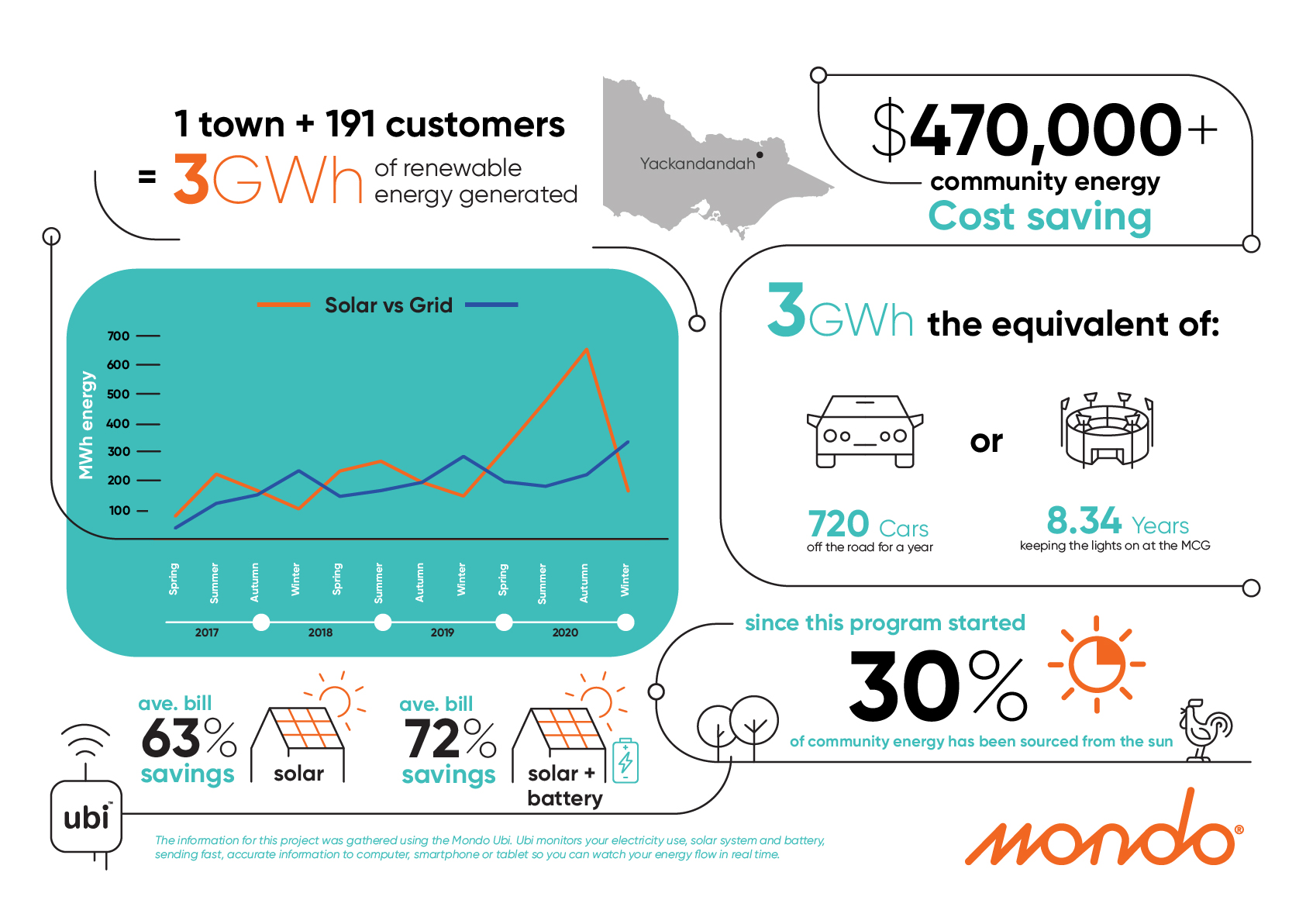 The project is demonstrating the financial and environmental impacts of solar photovoltaic systems. Moreover, these results do not tell the full story of solar in Yackandandah. The mini-grid (those homes and businesses connected and monitored by the Ubi Energy Management Platform) is just a portion of those who generate solar electricity in Yackandandah – with some 60% of buildings in Yackandandah currently hosting solar installations.

The town’s renewable energy journey is set to advance with the install of a 274kWh community battery. Located at Yackandandah’s old sawmill site, now the home of The Agency of Sculpture, it will be charged by an on site 65kW solar system. These panels will charge the battery during the day and it will be discharged during the evening – offering Indigo Power (community electricity retailer and Social Enterprise) customers the opportunity to buy the value of it’s stored renewable energy. For the wider community, the battery is a way of tracking and offsetting its reliance on grid imports – an important step towards reaching 100% renewable energy target.

The Victorian Government has funded $171,00 for the project through the recently announced New Energy Jobs Fund. Mondo is partnering with local volunteer group Totally Renewable Yackandandah (TRY) and Indigo Power, to get the project off the ground.

Mondo is pleased to be supporting the remarkable community initiatives in Yackandandah and across Victoria. Exciting changes are happening right now as we nurse our energy system from reliance on centralised coal generation to the smart orchestration of renewable and distributed energy systems. The future truly is looking bright!

Packed to the rafters